San Diego Arab Film Festival is Back for Its 12th Year!

The San Diego Arab Film Festival is back for 2023 with live, in-person presentations of feature length and short films at the Museum of Photographic Arts.  The Festival will open on Friday, March 3, and present 8 screenings, each showcasing one feature film and one short film, from across the Arab World.  Each evening, the Festival will also offer cafeteria-style Arabic dinner.

We are excited to bring these films to the San Diego community!

The Festival opening night will feature the Palestinian film Alam, winner of the Best Film, Best Actor and Audience Awards at the Cairo International Film Festival.  The following nights will showcase 2 other Oscar submissions, Tunisia’s Under the Fig Trees and Palestine’s Mediterranean Fever, as well as 5 other internationally recognized films.  From the Arab Diaspora  the Festival will present Jacir (filmed in Memphis, Tennessee) directed by Waheed AlQawasmi.  The Festival will also showcase Life Suits Me Well from Morocco, Our River…Our Sky from Iraq, Memory Box from Lebanon and France and The Dam from Sudan.

This year the Festival offers short films from across the Arab world representing a range of styles and genres.  The final line up includes films that have been screened at Cannes as well as other international festivals.  They include Hibernate and From the Mountain from Syria,  Merge from Saudi Arabia, Ashes (Cendres) fromTunisia, Bouchaib from Morocco, Warsha from Lebanon, Hamza: Chasing the Ghost Chasing Me. from Palestine and Virtual Voice from Sudan and Qatar.

Tickets are on sale now, including individual screenings at $15 (discounted to $10 for students), 3-ticket packages for $40 and passes for all 8 feature films for $80.  Arabic dinners (including vegetarian option) will be available each evening for $15.  Click here to purchase:

Online ticket sales close the morning of the event.  Tickets will be available at the door until sold out.

Tamer and his friends lead a typical Palestinian student’s life — until the beautiful Maysaa arrives. To please her, Tamer agrees to take part in a mysterious operation on the eve of Israel’s Independence Day, a mourning day for Palestinians.

With the help of a young Tunisian guide, a retired French soldier sets out into the desert on a quest for redemption.

The Dam Directed by Ali Cheri

Sudan,, near the Merowe Dam. Maher works in a traditional brickyard fed by the waters of the Nile. Every evening, he secretly wanders off into the desert to build a mysterious construction made of mud. While the Sudanese people rise to claim their freedom, his creation slowly starts to take a life of its own…

A poor Syrian kid with a great love for music sees a young woman playing accordion so he starts chasing her to get into a music institution where he can make his dream of being an accordion player comes true.

Maia, a single mother, lives in Montreal with her teenage daughter, Alex. On Christmas Eve, they receive an unexpected delivery: notebooks, tapes, and photos Maia sent to her best friend from 1980’s Beirut. Maia refuses to open the box or confront its memories, but Alex secretly begins diving into it. Between fantasy and reality, Alex enters the world of her mother’s tumultuous, passionate adolescence during the Lebanese civil war, unlocking mysteries of a hidden past.

During the period of colonization, some Moroccans from foreign schools experienced the tearing between the traditional Quranic school (el-Msid) and the modern European school, generating a situation of alienation. Bouchaib, a Moroccan child who joined the French school after a passage to the Koranic school, will live the experience of identity alienation which will not even spare his name. 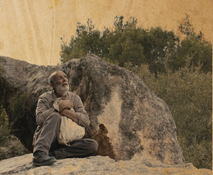 In a typically mixed Baghdadi neighborhood, the stories of a novelist and her neighbors unfold and intersect, as their lives are torn apart by extreme sectarian violence while nightly curfews trap them inside their homes.

Hamza: Chasing the Ghost Chasing Me Directed by Ward Kayyai

After recovering from an illness, middle-aged Hamza resumes a practice he began when he was released from an Israeli prison 20 years ago. Every day, he goes into the woods to hunt the lion that the locals don’t believe exists.

Under the Fig Trees (Tunisia)

In northwest Tunisia, young women work the summer harvest. Under the gaze of older workers and men, they flirt, tease, argue. Throughout the day, the orchard becomes a theater of emotions, where everyone’s dreams and hopes are played out.

Submitted by Tunisia to the 2023 Oscars

Warsha follows Mohammad, a Syrian migrant working as a crane operator in Beirut. One morning he volunteers to take on one of the tallest and notoriously most dangerous cranes in Lebanon. Away from everyone’s eyes, he is able to live out his secret passion and find freedom.

From the Mountain (Syria)

From Aleppo to the Ghetto. JACIR, is a look at the divisiveness of U.S. politics through the eyes of a Syrian refugee (Malek Rahbani) as he faces the hard truth of chasing the American dream on the streets of Memphis. While living in poverty, witnessing social injustice, and dealing with his conservative opioid-addicted next-door neighbor (Lorraine Bracco).

From the Mountain Directed by Faisal Attrache

Historical narrative film about the Great Syrian Revolt of 1925 and its leader Sultan Basha Al Atrash’s quest for justice against French colonial oppression.

It is the mid-1990s. In a small town in the north of Morocco, Fouad is the only employee of the local post office. When he is stricken from neurological disease, his life changes, and a new life begins for Fouad, his wife, and their children. Their home will be filled with love, sorrow, and memories. While Fouad is slowly dying, his family members rediscover themselves. As time goes by, the wounds begin to surface – but the desire to live is inextinguishable.

This is a satirical review of our times. Suzi doll is an ego-warrior. An online avatar, marching to the algorithms of social media. She is lit by temporary outrage. A trending indignation. A passion that is fashion. A politics of the popular. Her activism is abstract. Her help is hypothetical. We know many girls like Suzi, and many times we are her: vacuous virtual voices, echoing injustices.

Mediterranean Fever: In this wry, absurdist tale of mid-life restlessness, husband and father Waleed dreams of becoming a successful novelist yet is plagued by a severe case of writer’s block. Neither his therapist nor his family are able to offer much support, but when he forges an unlikely connection with his new neighbor, petty criminal Jalal, his fortunes seem to shift. Under the auspices of research for his next novel, Waleed tags along with Jalal on his illicit daily routine, leading to a series of fraught situations that find Waleed out of his depth.

Submitted by Palestine to 2023 Oscars

In a time where Saudi society is undergoing drastic changes, Ahmad, early 30s, sees the reflection of these in the company where he works when male ad female departments are merged.

Online ticket sales close the morning of the event.  Tickets will be available at the door until sold out.

2022-2023 is the eightth year that the San Diego Arab Film Festival is receiving support from the City of San Diego Commission for Arts and Culture.  This recognition and support represents an important milestone for the Festival and for San Diego’s Arab Community: it shows that Arab culture is an important part of the fabric of San Diego!  In addition, on-going support from the Arts and Culture Commission helps lay the groundwork for the Festival’s growth as a dynamic part of San Diego’s cultural life.

Financial support is provided by City of San Diego Commission for Arts and Culture.

Copyright 2020 KARAMA
Back to Top